“It was going to be an amazing day, the plan to seek the path less traveled on the many gravel back roads west of the Village of Radium Hot Springs.” Let us help you Find Your Peace, on this Back Roads Adventure. 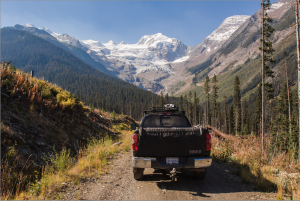 Back Roads Adventure in Radium Hot Springs – With the Radium Back Country Map & BRMB Kootenay Rockies BC that can we purchased at the Friends of Kootenay Gift Store at the Radium Hot Springs Visitor Centre in-tow we rolled down from the main four way stop in the Village of Radium Hot Springs towards the Canfor Mill.  Thousands of logs waiting for processing in the mill lot gave us an indication of the vast forested area that we were about to enter. 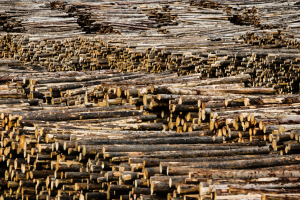 Less than a minute into our back roads adventure and we were confronted with the incredible beauty of the Columbia wetlands. Our truck tires had barely left the pavement in exchange for gravel when we had to pull over to take a picture. 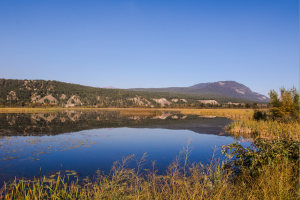 The stillness of the water was juxtaposed against the busyness of the many birds going about their daily routine. The highlight was a low flying Osprey that buzzed us while scouting for its next meal.

As we started to roll again on our back roads adventure a group of fellow adventurers on side-by-sides (off road vehicles) passed us with waves. They looked packed for a day’s worth of explorations and we would end up hop-scotching them throughout the morning. They seemed to have the same idea we did, to take in the intense beauty of the fall colors in these parts. 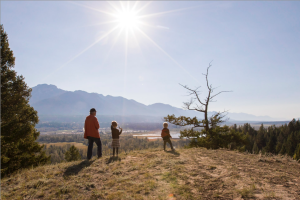 Our next stop was scarcely 5 minutes later. We took advantage of the opportunity to view the wetlands from one of the many elevated, hoodoo-like prows that line the west side of the valley. We weren’t the only ones there taking in the view which showcases an array of sprawling water and greenery that is the wetlands. These kinds of areas sustain so much life and act as a natural purifier for the air and water. It’s hard to downplay their role in the eco-system and it’s a pleasant spot to spend time. 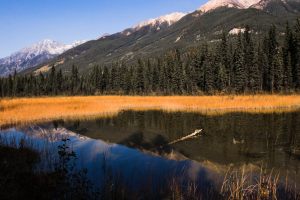 We were determined to make some ground before our next stop by a river but we ended up slowing to snap at least a couple of pictures as we traveled.  The views were outstanding with green forests, brown grass in the fields, blue water, red rock and snow-capped peaks.

We had another stop where the road met the Horsethief Creek at a bridge. The beauty of the fall colors close to the stream and a group of horses sunning themselves forced the issue. As we pulled up we saw the side-by-side group again. They too felt the force to pull over like a magnet and take in the energy of the place. Watching the beautiful horses seemed to slow time down to a peaceful moment and it was hard to believe we were only 15 minutes from the bustle of the 4 way stop in town.